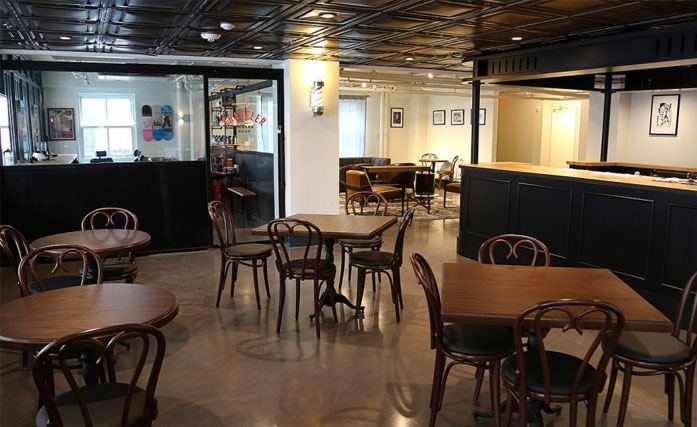 The Burns building, 401 E. Houston St., is slowly filling up.

Last week, Chuck Holdridge opened the Traveler Barbershop on the first floor of the Burns, which is accessible via an entrance on Jefferson Street near Peacock Alley.

Holdridge will continue to operate his original shop in a Streamline trailer at 2202 Broadway.

The Burns shop will be open 8:15 a.m.-4 p.m. Monday-Friday. Holdridge expects those hours to expand within their weekday frame, but he doesn’t expect to operate on weekends.

He sees some inherent challenges with this part of downtown and Houston Street. So he’s concentrating on the influx of new tech workers that are expected to move into office space currently under development on Houston Street, and other nearby buildings. Across Jefferson, for example, developer GrayStreet Partners is renovating the upper floors of the Kress building into office space for co-working company WeWork.

“I love the idea that someone will come in from Alamo Heights and get a drink next door at the pizza place, and make an afternoon and get their haircut,” Holdridge said referring to Playland, the pizzeria that opened recently across Houston at the Maverick building, “but I do realize not everyone is going to be as motivated to come in and pay for a parking spot.”

He continued, “Really, we want to focus on the folks who are there.”

Some workers with PricewaterhouseCoopers and Cogeco Peer 1 have moved into the Burns, but the second floor remains unoccupied.

“Once the folks who are actually occupying the building actually move in, I think it will be a slam dunk,” he said.

For Commonwealth Coffee & Bakery, the Burns, which is undergoing a renovation by developer David Adelman, will be the company’s third downtown location. In late December 2017, Commonwealth opened at Yanagaua Garden in Hemisfair. And in February, it opened in the Weston Centre.

“Every location we look at, we look at community,” co-owner Jose Ramon Campos said. “That’s what Commonwealth is about. We look at long-term. The revitalization of downtown, where people are going, that’s what we see.”

They hope to open in the Burns in 1-2 months.

The Burns Commonwealth location will serve coffee and breakfast tacos, light lunch items such as paninis, pastries, but also alcohol and cigars in a public lounge area where the Traveler is also located.

“I don’t want to say bar—it’s not a bar—but (we want to) make it into a social, and very inviting, setting,” Campos said.

Campos said he doesn’t have a handle on hours, yet.

The Burns would be Commonwealth’s tenth location. The flagship is on Davis Court across from the University of the Incarnate Word. They’re currently working on opening a commissary next to San Antonio College, and another location at Concord Plaza. It also has a handful of kiosks inside hospitals.

On the Burns’ ground floor facing Houston, and in the basement, Dallas-based Devils River Whiskey is relocating its headquarters from Dallas as well as opening a distillery. It’s scheduled to open by summer 2019.

back to news next news